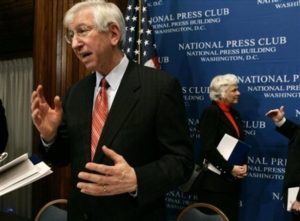 The health and well-being of student-athletes is at the very heart of the NCAA’s purpose and mission. The NCAA was originally founded in 1906 to enforce new regulations that would make college sports safer for students. Since then, the Association has aimed to protect the student-athletes—through safety regulations, financial support, guidelines for universities, and more.

Throughout his career at the NCAA, Myles Brand embodied that commitment to student-athletes, always ensuring that their well-being was their highest priority. He helped make the NCAA more open and responsive to student needs and concerns. He expanded the scope of the NCAA’s mission to include Diversity and Inclusion initiatives, and he defended all underrepresented and minority student-athletes against injustice.

In fact, Brand’s academic reform plan was largely rooted in protecting the student-athletes’ right to be students. Brand knew that an unhealthy work-life balance could lead to slipping academics and difficulty graduating, which is why the NCAA needed to emphasize a balance between academics and athletics. Brand’s Academic Progress Rate (APR) helped the NCAA hold universities accountable for their student-athletes’ success.

As Brand described in his very first NCAA State of the Association Address, “Our reform goal should be enhancing the academic and developmental environment necessary for the full success of student-athletes. In the end, it is all about the student-athlete.”

While the majority of his work emphasized the educational aspects of student-athlete well-being, Brand also spoke directly about various health-related issues and other student-athlete concerns about their experiences in collegiate athletics.