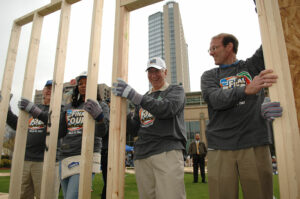 Throughout his career, Brand was a vocal advocate for diversity and inclusion. As early as his time as Provost at The Ohio State, he was speaking about the importance of supporting minority students and combating the injustices in our society.

During his tenure at the NCAA, Brand was committed to developing NCAA initiatives to address social justice issues regarding race, gender, class, sexuality, and disability. He sought to restructure the hierarchies of power that prevented true equity within athletics and to expand the opportunities for education and sport participation for underrepresented and minority students.

Brand defended Title IX when it was under attack by President George W. Bush. He vehemently argued against the “dumb jock” myth that pervaded perceptions of African American athletes. And he often spoke out against the low numbers of women and people of color in administrative and coaching positions. In his words, diversity hiring and affirmative action were not only morally right but also the smartest course of action.

In August 2005, Brand created the NCAA’s Office for Diversity and Inclusion, hiring African American scholar Charlotte Westerhaus to serve as Vice President of the office. Together, they developed and implemented programs such as the Diversity Education Program, the Football Coaches Academy, and the Leadership Institute for Ethnic Minority Males and Females.

In 2005, the NCAA Executive Committee took another unprecedented step in the world of sports by refusing to conduct championships at institutions with offensive mascots. As an organization, the NCAA had no official authority to ban such mascots, but their stance was a clear condemnation of racial caricatures. In Brand’s words, “This is not about an effort to be politically correct. It is about doing the right thing.”

Over the years, Brand repeatedly spoke on issues of social justice in sports, doing his part to change our culture for the better. Brand himself admitted that solving these injustice problems was one of the most persistent and frustrating challenges of his tenure: one that still, to this day, reveals an unfortunate resistance to true equity.

“Academics and athletics: playing for the same team: NCAA president discusses the challenges of leading the organization in an era of academic reform,” Black Issues in Higher Education, 21:4, pp. 26-31, by Ronald Roach