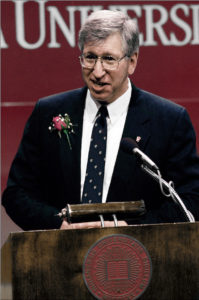 “Academics and athletics: playing for the same team: NCAA president discusses the challenges of leading the organization in an era of academic reform,” Black Issues in Higher Education, 21:4, pp. 26-31, by Ronald Roach

“BackTalk; In Athletics, Level Field Must Begin in Classroom,” The New York Times

“Education of College Athletes,” Brand responds to viewer messages about the NCAA’s proposal to improve the quality of college athlete education

“Putting the ‘Student’ Back into Student Athlete,” Black Issues in Higher Education, 22:4, pp. 28-30, by Kendra Hamilton

“The Role and Value of Intercollegiate Athletics in Universities,” Journal of the Philosophy of Sport, 33:1, pp. 9-20