The Collegiate Model vs. The Professional Model 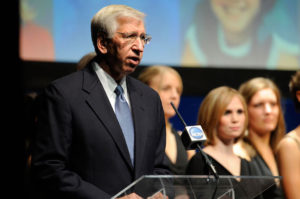 During his tenure, Myles Brand repeatedly refuted some of the myths and misperceptions around intercollegiate athletics, including many criticisms that college sports was only about the money. He introduced the idea of The Collegiate Model of athletics, which differed from professional sports by prioritizing education over profits or competitive success.

While Brand recognized the need for some commercialism to financially support universities, he warned against any commercial activity that could jeopardize the role of student-athletes as students first. He argued that student-athletes were attending college for an education and should never be treated as professional employees of the institution.

Brand described the need for balance in his 2009 State of the Association Address, saying: “The objective, then, is to determine the balance point, all factors considered, between crass over-commercialism and unrealistic idealism… Once that occurs, we will be able to move forward in the conduct of intercollegiate athletics with a clear conscience.”

In his speech, Brand identified two key guiding principles to help universities stay balanced in the years to come. First, student-athletes should never be exploited in commercial activities. And secondly, all commercial activities in college athletics must be consistent with the values and mission of higher education. Following those guidelines is hardly simple, but Brand remained adamant that collegiate athletics was not the “entertainment division” of higher education. Its purpose was to enhance student-athletes’ college experience and teach them important life values.

The question of commercialism in college sports remains a complicated and controversial topic in the world of intercollegiate athletics. Brand wrote and spoke on issues like pay-for-play and licensing that are still relevant and heavily debated today.

“AGB Statement on Board Responsibilities for Intercollegiate Athletics”

“Leadership and Challenges: The Roles of Intercollegiate Athletics in the University,” NCAA State of the Association delivered at 2008 NCAA Convention