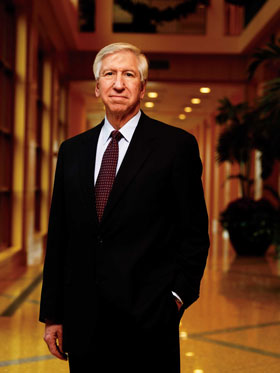 Myles Brand became President of the National Collegiate Athletic Association (NCAA) in 2003—the first university president to ever lead the organization. Because of his experience, Brand brought a new perspective to the NCAA that emphasized academics and understood how to approach athletics as part of a larger educational whole.

Brand sought to affect a cultural change with the NCAA, creating an organization that was more responsive to student-athlete needs and encouraged greater oversight by university presidents. Early on in his tenure, he identified two essential goals that characterized the legacy of his tenure: academic reform and equity advocacy.

During his tenure, the NCAA became more willing to consider student-athlete concerns—all while protecting their educational right to be a student. Brand helped introduce the new Graduation Success Rate (GSR) to more accurately assess graduation rates and the Academic Progress Rate (APR), which could track student-athlete progress and hold universities accountable for their success.

Throughout his career, Brand was also a vocal advocate for diversity and inclusion, continually expanding the scope of NCAA initiatives to address issues of injustice regarding race, gender, sexuality, and disability. He created the NCAA’s Office for Diversity and Inclusion in 2005 and sought to restructure the hierarchies of power that prevented true equity within athletics.

The archives below are a collection of his significant writings, speeches, and other works during his tenure as President of the NCAA—organized chronologically.

“Pay for Play is Fine—But Not in College Sports,” Huffington Post

“Why the Capitalism Argument on Pay for Play Doesn’t Work,” Huffington Post

“Fantasy Leagues May be Less Than They Seem,” Huffington Post

“Getting a Grip on Fan Behavior in College Sports,” Huffington Post