The Voice and Conscience of College Sports 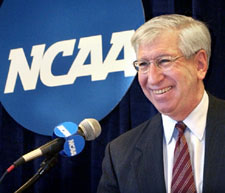 When Myles Brand first became President of the NCAA, he faced a number of questions asking about the NCAA’s true role in intercollegiate athletics. People did not fully understand why the NCAA existed—let alone the importance of their mission. So, Brand sought to change perceptions of the Association and clearly establish the values that the NCAA represented.

Historically, the NCAA was established in 1906 by a small group of university presidents at the behest of President Theodore Roosevelt. At the time, student-athletes would often be severely injured during games, so their mission was to reform college sports regulations to make them safer for students. They succeeded, and the NCAA embodied a lasting obligation to set those standards and ensure contests were safe and fair.

In 2003, Brand aimed to demonstrate that the NCAA was still the voice and conscience of intercollegiate athletics, protecting the well-being and interests of student-athletes. He helped clearly articulate the importance of The Collegiate Model—which prioritized balance between academics and athletics—as well as guidelines for universities on how to maintain those values.

During his tenure, Brand was occasionally criticized as the “czar of college sports,” saying that he either should or shouldn’t exert more control over the NCAA’s members. However, Brand repeatedly argued that the presidential leadership role of the NCAA was one of guidance and consensus. The NCAA president and his staff worked with college presidents, administrators, and athletic teams from over one thousand universities and colleges to implement change through oversight and leadership.

Together, the NCAA represents the collective voice of intercollegiate athletics, but Brand understood that only through cooperative consensus can they create the best experience for student-athletes across the country.

“Why the Capitalism Argument on Pay for Play Doesn’t Work,” Huffington Post

“Getting a Grip on Fan Behavior in College Sports,” Huffington Post

WISH-TV Broadcast of Mondays with Myles – “State of the Association” from Washington, D.C.